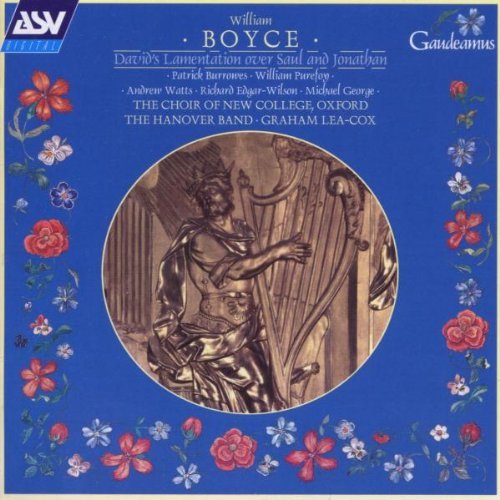 ".. Following his widely acclaimed recent recording of Boyce's Ode for St Cecilia's Day (ASV), Graham Lea-Cox has come up with another rarity by the composer, David's Lamentation over Saul and Jonathan. The disc further includes another, smaller-scale St Cecilia's Day ode as well as two arias and a recitative from the earlier London version of the Lamentation. Boyce wrote the work in 1736 when he was 24 years old but revised it for performances in Dublin during the mid-1740s. It's a beautifully crafted piece introduced by a deeply affecting two-movement Overture in G minor whose initial gesture momentarily recalls one of Bach's great laments, in the same key, contained in the opening chorus of his cantata Jesu, der du meine Seele (BWV 78). Lea-Cox has assembled much the same forces as he fielded for the 'St Cecilia Ode', that's to say, the Choir of New College, Oxford, and the Hanover Band. And, as before, and with similarly happy results he uses boys from the choir for all the soprano, and some of the alto solos. Boyce sustains the melancholy, sometimes broodingly intense character of this dramatic scene - it's not really an oratorio - wonderfully well, punctuating the sections of an overtly 'lament' character with some vigorous airs and passages of accompagnato, in which the mighty shadow of Handel is often present.In short, this is a world premiere recording most urgently to be acquired. The overture alone should be enough to tempt readers but, if not, the poignant chorus 'For Saul, for Jonathan, they fast, they weep' should do the trick.

Available now on:
Back
Hello. We use cookies on our website to give you the most relevant experience by remembering your preferences and repeat visits. By clicking “Accept”, you consent to the use of all the cookies.
Do not sell my personal information.
Cookie SettingsAccept
Manage consent